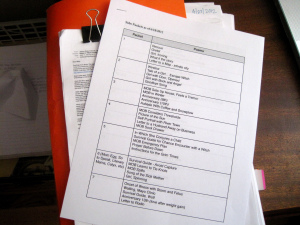 Those of you who’ve been reading along know that I’ve declared this summer to be the Summer of Submissions. Just for fun, let’s call it the S.O.S.

Did you know that S.O.S. doesn’t really stand for anything? It’s just an easily transmitted and identified series of dots and dashes in Morse code (so says wikipedia). Which dovetails nicely with my strategy for submissions this summer — let’s make it as easy as possible to submit poems, so easy that it becomes a habit.

Since last week with it’s zero submissions count wasn’t something to form a habit off of, I decided to do some legwork over the weekend. One of my challenges when it comes to submitting is feeling uncertain about what poems to send to which journal(s). I knew if I could circumvent this challenge, even a little bit, I’d be more…